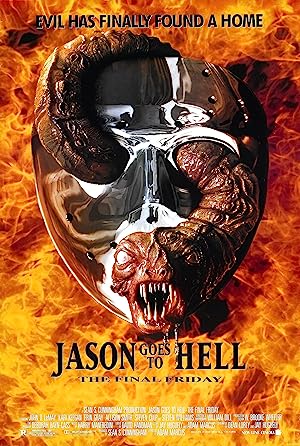 "The second film touted to be the "Final" _Friday the 13th_ movie, and the second one to lie. Being honest, right out of the gate, I don't particularly like _Jason Goes to Hell_, and not only because of the negative sense-memory I have after playing a drinking game to it with straight Jack Daniels. But at least it tried some different things. Different tone, different look, different direction, different... Production company? It's still really not good, but it does sort of break up the marath"

"***Great intro & first act, but kinda distasteful and convoluted with a cartoony last act*** Released in 1993, "Jason Goes to Hell: The Final Friday," aka Part IX, is the oddest entry in the series, along with the next one. But this isn't much of a surprise since three of the previous four installments were departures from the typical Friday formula -- Part V, VII (which features a Carrie-like character) and especially VIII (which switches the setting from Crystal Lake to a cruise ship and th"

"Decent watch, might watch again, but can't recommend outside a Bad Movie Night or a Friday the 13th Marathon. It's both refreshing and sad to see them try to re-invent Jason. As a fan of "Fallen" I like the idea of the villain transferring from person to person, but they twist the concept a bit more than I would have wanted at points. Adding a "chosen one" trope to this doesn't do much for me. Having a nearly unkillable villain alone should be intriguing enough, adding extra rules to it "